Today was activity Monday for Mini Miss and myself.

For me it started last night with some preparation....Printing a train and alphabet cards and cutting them out. 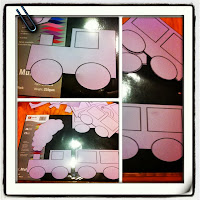 Then this morning we set up the activity together. 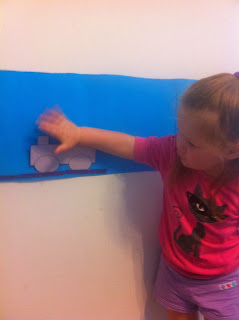 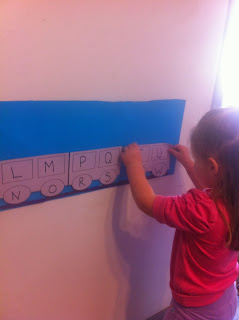 By this stage Mini Miss was very excited about the train. She had already noticed the letters on each carriage and had been pointing out all the letters she already knew.

This activity was designed to encourage her to explore the alphabet some more and hopefully learn and recognise some new letters. At the moment she can recite the alphabet and recognises about half the letters, particularly the letters in her name, which she can give me in the right order (small mummy boast there! What?! I'm allowed to be proud!).

Anyhow, I showed her the box of "oh circles mummy" and how they each had a letter on them too. I had to demonstrate what to do. The idea being that you matched the circle to the letter on the train. 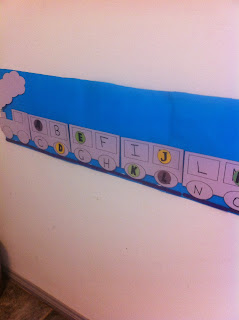 This activity was so much fun! Mini Miss even enjoyed sticking the blue tack on each circle to stick it to the train. As well as alphabet recognition, we had fine motor skills, lots of talk about colours and shapes and trains...so much talk about trains! Mini Miss has a LOVE of trains, ever since we were lucky enough to win that wonderful weekend away to Sydney thanks to the Coffs for Kids website.

I plan on leaving the train up for the week. She has already gone back and added more letters, and even some stars as decoration for the sky! I think we will continue to decorate, and when we are done, because the train and the circles are made out of cardboard, we will pack it away for another day.

But as always, the best bit was we spent one on one time together!

We talked, we laughed, we played. The train went on an adventure to a magical world of Mini Misses imagining....

We did so so much more today. Went on another nature walk, fished for alphabet fish, went for a swim....but I guess that is for another post!

If you want to recreate our Alphabet Train for your little one, copy the pictures below, print on A4 card, cut them out and then set up your scene. We went simple as I wanted to focus today on the letters, but it can be as decorated as you want.

We used blue cardboard as a backdrop, and purple paddlepop sticks as the tracks. 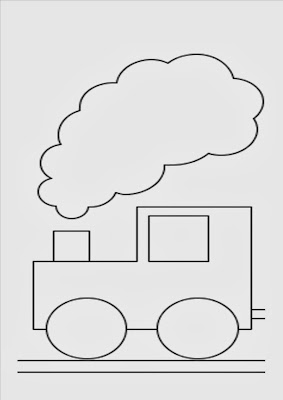 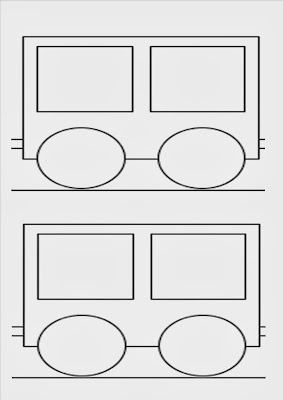 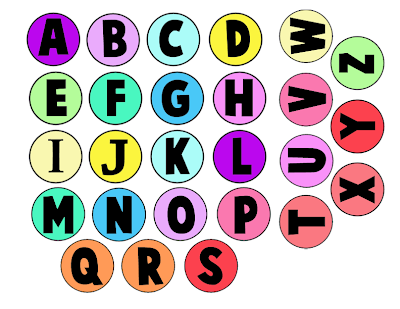