Today I decided on some messy play. Something simple but so much fun!

We made our own paint!!

It's a very simple recipe

I gathered the ingredients we would need with Mini Miss. She loves being involved in EVERYTHING at the moment, so I pulled it out of the cupboard, she put it on the bench. Then she went straight to the Tupperware cupboard to get our "special mixing bowl". It's just a silver bowl, but I always use it for mixing craft stuff in, so she just KNEW!! 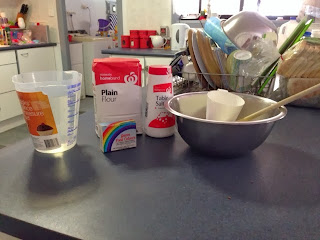 As Mini Miss is now 2.5, I decided she should do the making, with supervision of course!

I find it VERY hard to ignore the mess, but this activity isn't about me, it's about her and I don't want to fill her head with my weirdness, so I reign it in as much as possible! Also, she is like her Mum, messy in the kitchen! (I drive myself crazy with cleaning up as I go when I cook. I am a major mess in the kitchen, but apparently my creations always turn out ok, so I guess it's a good thing!)

I talked her through each step, explaining things like she needed to fill the cup right to the top, what she needed next etc. this is a VERY basic recipe, so it wasn't hard, and pouring, scooping, measuring and stiring are perfect skills for her to be learning. 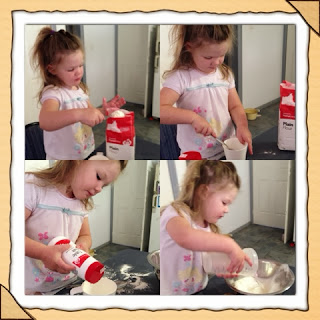 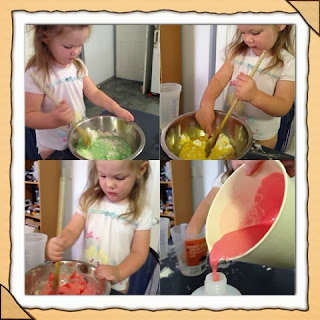 In fact, all I really did was add the food colouring and finished off the stiring to get out most of the lumps.

So basically, you put all the ingredients in a bowl, add a few drops of colour and stir. I added extra water to this recipe as I was putting it in sauce bottles and I needed it a little runnier to make it easier to use. The consistency to aim for I think is runny pancake batter. (Everyone knows what a good pancake batter looks like!!).

I then poured it carefully into seperate sauce containers. We ended up with 4 colours. 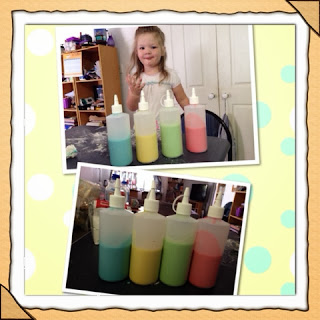 Of course, Mini Miss insisted in being involved in the clean up, and seriously, what Mum is going to say no to that?!! (And if you would, then I say don't! Encourage their involvement in all steps, including clean up! Believe me, all too soon they are teens who dont do anything with being dragged by the collar! Yes, it takes longer, sometimes it creates more mess, but it's teaching them to clean up after themselves.) So I gave her a sponge and let her wipe down the bench while I did a quick wash up.

This is a messy activity! They will spill flour, splash water, miss the cup, and if your toddler is like mine, eat some of the ingredients as you go! (Her face when she tasted it was priceless! Like she just sucked on a lemon! But she kept eating it!).

The good thing with making things like paint at home is you know what's in them, and despite the taste, it won't make your little one sick.

So yes, in hindsight, I SHOULD HAVE put a towel on the chair she was standing on! Good tip that! If they are standing on a fabric chair, COVER IT!!

Another good tip if you are letting your toddler do this is have separate "craft" flour/salt/other ingredients. They put their hands in the containers and packets, they lick their fingers and dive back on in! So, keep the food ingredients separate from your craft ingredients!!

After lunch we headed outside where I had set up a special painting activity, painting with her new paints on black card. We nearly ALWAYS paint in white paper, so I thought she would enjoy this difference. She sure did! Lots of talk followed as she painted about the night sky and "outta space". Lots of describing what she was creating with her new paints, it was great! 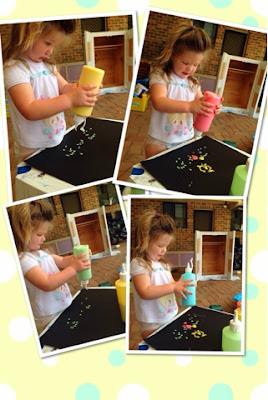 And her final products? 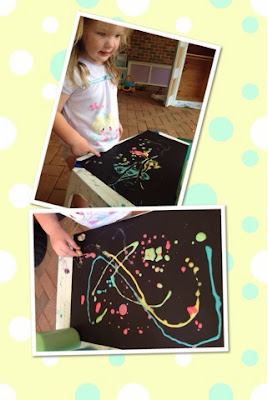 The first one was "night time" and the second one was "space".

Today's activity was great, it was messy, sensory and gave us lots of opportunity for talking about lots of different things (textures, colours, measuring, space, night time....).